For most people, they’re happy with the boots that the MoD issue. However for those of you that aren’t happy with these boots. There’s a solution! Brown LOWA boots.

Now, when it comes to LOWA boots they speak nothing but quality. Every little details about the brown LOWA boots has been carefully constructed to ensure a support boot. 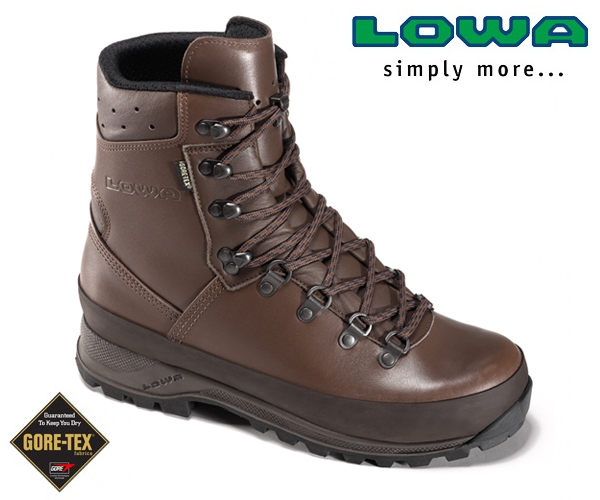 The sheer attention to detail, the quality and the affordability has bred a huge following for LOWA and their boots. It’s with the popularity of their boots that have inspired some of the brown LOWA boots. Some of the brown LOWA boots are based upon LOWA’s best selling black boots. Takefor example the Brown Mountain Boots and the Brown Combat Boots.

LOWA have a selection of high quality brown military boots for you to choose from. If you’re planning on getting your boots wet, then we would recommend a pair of Gore-Tex Lined Brown LOWA boots such as the Urban Military 2 GTX or the Recce GTX.

For some people, it may not even be necessary to have Gore-Tex Lined boots. If for any reason you do end up getting your brown LOWA boots wet and they’re not Gore-Tex Lined, don’t worry too much about it. They will dry out in absolutely no time. Once dry, we recommend applying a layer of Leder Gris Extreme Clear Wax. This will avoid the leather of the boots from hardening after drying.

Please Note: Leder Gris Extreme Clear Wax is not intended for regular use!

To keep on top of your brown LOWA boots, the most popular boot wax is the Leder Gris Original MoD Brown Boot Wax. This is the boot wax that we recommend for regular use. This wax replaces the natural oils in the leather to prevent it from drying out and hardening. Therefore, increasing the life of the boots.