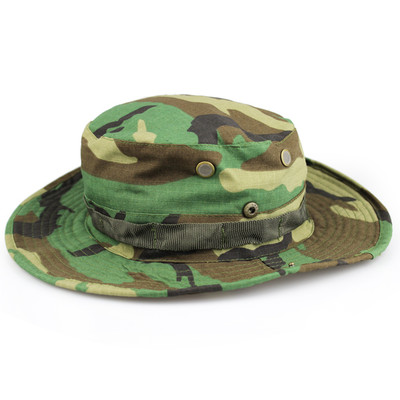 This is a fantastic hat to keep the hot sun off you when your out doors playing airsoft.

its has a adjustable strap on it to stop it blowing off your head when your running around with your gun and its easy to pack away when you dont need it as you can just fold it up.

there is also 2 buttons on the side of the brim so you can change the style of it by using them.

we sell this hat in lots of different camo patterns and colours and we also sell gun holsters and elbow or knee pads to match.

The DPM Woodland Camo (short from the 'Disruptive Pattern Material) on this hat is one of the most known and recognisable camo patterns in the world. Designed for the the British Special Forces its is now used by used by many armies across the world. this camo features pattern that effectively breaks up the human outline at a greater range of distances and comes in and black, dark brown, mid-green and a dark sand colours that make it very effective in the most of woodland environments that you would find in europe.