The 829 Naval Air Squadron Merlin has taken teams of Sailors and Royal Marines ashore. They spent the previous day surveying the affected areas by air in order to assess where the aid is needed most. A specialist team has now moved ashore and has prepared a Helicopter Landing Site on the Island of Calagnaan. Once on the island their task is to assist local residents restore buildings, transport links and ensure the much needed Philippines aid reaches all remote areas.

“The villagers have asked for tarpaulins, wood, a disaster relief pack, water and a generator as theirs had been rendered unusable by the storm,” said Capt Hyslop from 29 Commando Royal Artillery.

“This was a real success as we provided them with exactly what they needed to get back on their feet.”

HMS Illustrious has taken over from HMS Daring, a Type-45 Destroyer, which had been in the area for a week delivering immediate Philippines aid after Typhoon Haiyan struck. Helicopters are flying throughout daylight hours, with their Air Engineering support working during the night to ensure that they are ready for the following day. 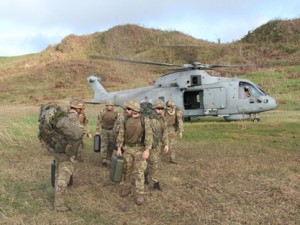